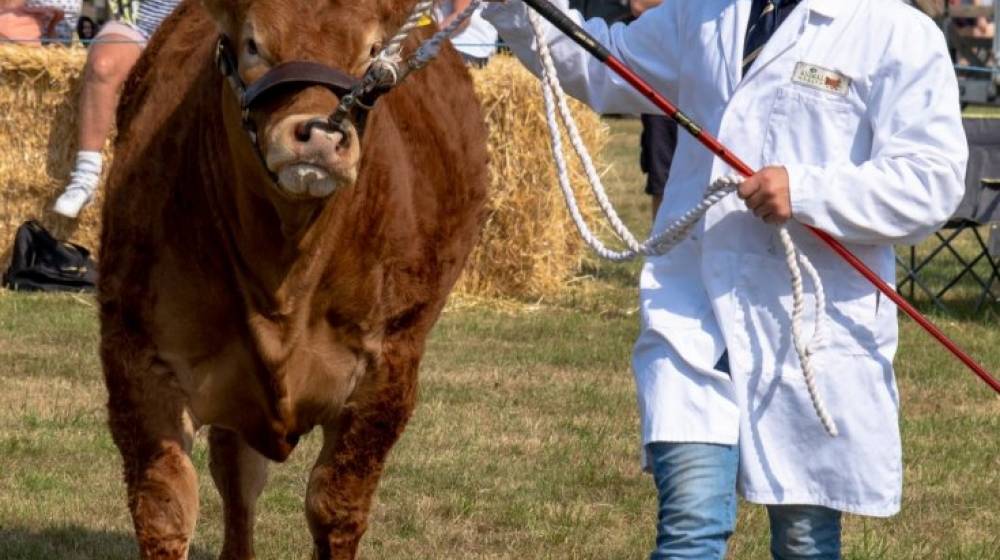 Twenty-eight year old Cai Edwards from Clwyd, north Wales, farms at home alongside his father, Gwyn, mother, Lynn and brother, Dion. The family farm spans 400-acres of grassland which is primarily utilised for beef and sheep, and Cai is a regular face on the showing circuit having taken over the halter from his father a number of years ago.

Cai and his family  hope to take a team of five or six to Borderway Agri Expo this year. Possibly two homebred heifers that showed in summer, one pedigree Limousin heifer and hopefully one or two new faces too.

The family are currently running a flock of 600 breeding ewes, 80 head of commercial Limousin x British Blue suckler cows plus 25 pedigree Limousins. In addition, the farm also has two chicken sheds which house 100,000 broilers and the family also carry out some haulage and contracting work too.

The herd is run as a closed herd as much as possible with all replacement commercial heifers being home bred. “Cows calve down in the spring from April onwards, and we aim to have calving wrapped up by the end of June,” explains Cai. “We calve inside as we find it easier in case of any problems. Cows and calves are then turned straight out.”

The Edwards have three Limousin stock bulls as well as one British Blue which are all used on the cows, and all heifers are AI’d.

Cows are out at grass from calving through to the autumn when they are housed on a simple diet of hay, straw and silage. Replacement breeding heifers are retained on-farm, whereas male calves are castrated and sold at 10-12 months as stores through St Asaph market in Denbighshire.

Cai began showing in Young Handler classes at just ten years old and his passion grew from there. He gradually took over the halter from father, Gwyn, and today has almost two decades experience presenting cattle for judging in the ring.

A handful of Cai’s showing highlights include winning the English Winter Fair in 2017 with Queen B and winning Welsh Winter Fair in 2018 with the Limousin X heifer, Eye Candy. Queen B was, in fact, purchased by the Edwards at the Welsh Winter Fair after he won at Borderway Agri Expo for Luke Bowen. One of the family’s most successful heifers has to be Halfpenny who remained more or less unbeaten in north Wales during the 2014 season.

The 2022 showing season has certainly been a one to look back on with pride for Cai who has achieved some good results at various local shows and had a very positive day at the Royal Welsh in July. Cai comments: “We took two homebreds and two pedigree Limousin heifers to the Royal Welsh this year. We didn’t quite get there this year, but we were knocking on the door.”

Another memorable moment at this year’s Royal Welsh was when Cai was invited to welcome the Princess Royal into the showing ring. This afforded him the opportunity to chat with the Princess about showing cattle and the work and dedication that goes into producing these animals to such a high standard.

The pinnacle, however, must be when Cai was awarded the Royal Welsh Agricultural Society’s Dr Emrys Evans Award after impressing the judges when they visited the farm. The award is open to all livestock sections and the theme of this year’s award was ‘Stockman’s Skills’.

“This was a very proud moment,” says Cai. “There were so many fantastic entrants, so to come out with the award was just amazing.”

Turning to this year’s Borderway Agri Expo, Cai expressed what a fantastic shop window the event is for the whole industry. For the Edwards family selling stores, it gives vendors an idea of how cattle turn out. Commercial stock have similar breeding to the pedigree animals, so it’s a great opportunity for them to show the potential of their stock.