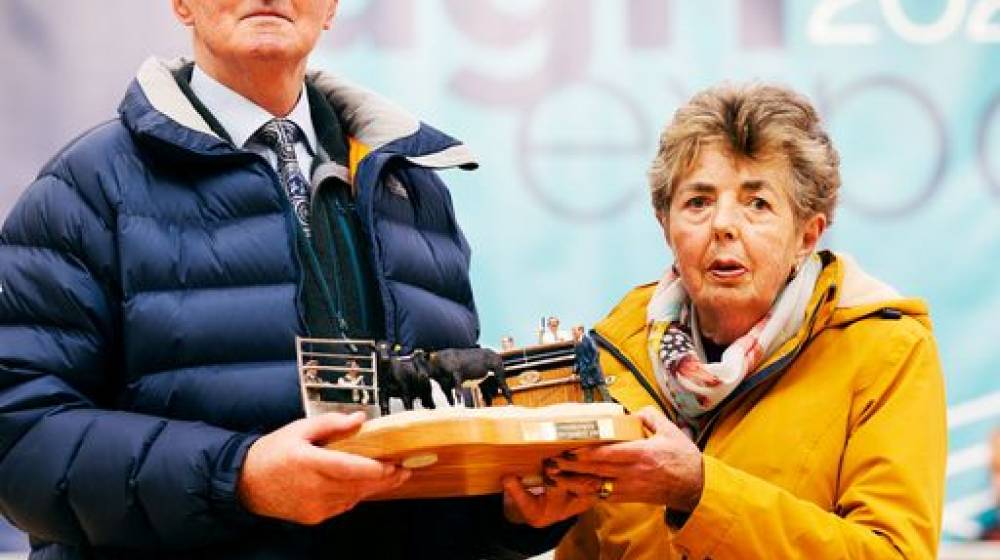 Cumbrian livestock farmer, John Hall, has been announced as this year’s winner of the David Thomlinson Award at UK’s leading autumn livestock showcase.

Cumbrian farmer, John Hall of Inglewood Edge Farm, has been announced as the winner of the David Thomlinson Award which was presented at Borderway Agri Expo, for the second year running after its launch last year.

Having farmed at Inglewood Edge since 1949, John has dedicated his life to his work within the industry and through dedication and hard work has built up the family farm to what it is today.

This prestigious award was launched by Harrison & Hetherington in 2021 to recognise commitment, success, and accomplishment within the livestock farming industry. Following David Thomlinson’s sad and untimely death as a consequence of a tragic accident on his farm, this award is intended to commemorate David’s life and achievements, with the aim being to recognise a person within the livestock industry to be, just like David himself, a passionate livestock farmer and an exemplary role model within the industry.

John Hall runs 906 acres of grassland and has today established himself as one of the most notable Beltex breeders having been involved with the breed since it was very first imported into the UK. He has given his all to the Beltex Sheep Society, both on the council and as chief inspector travelling the length and breadth of the country to promote and help the breed.

Alongside his commitment to the Beltex Sheep Society, John has also sat on the British Blue Council and is heavily involved in supporting and encouraging local Young Farmers Clubs. An extremely well-respected name, John is a familiar face on the showing circuit, both as an exhibitor and a judge, and his family has celebrated much success locally and nationally, particularly with their Beltex sheep.

The judging panel, consisting of David Thomlinson’s wife, Sheila Thomlinson, his neighbour and close friend David McRea, and former colleague and friend David Pritchard, said of the winner: “Judging this year’s nominations was a very difficult job, however John simply shone through. His dedication and passion for his industry represented exactly what David stood for and I believe he is a very worthy winner.

“His nomination outlined his commitment to helping others succeed, as well as paving a way for young people to secure the future of the industry and the breeds he cares so deeply about. His knowledge and experience are phenomenal and his achievements throughout his lifetime are something to be very proud of.”

John is also a solid supporter of auction marts and only sells his stock live through the ring as he firmly believes this is the only way to keep getting a fair price for what he has always passionately produced. One of his fondest memories, that he talks about often, is of himself and David selling at H&H, stood right in the middle of full pens of cattle; a lasting memory for many that saw it.

John, who was completely overcome on receiving his award, commented: “I am stunned and absolutely thrilled. I can’t comprehend that people think so much of me. It is such an honour.”