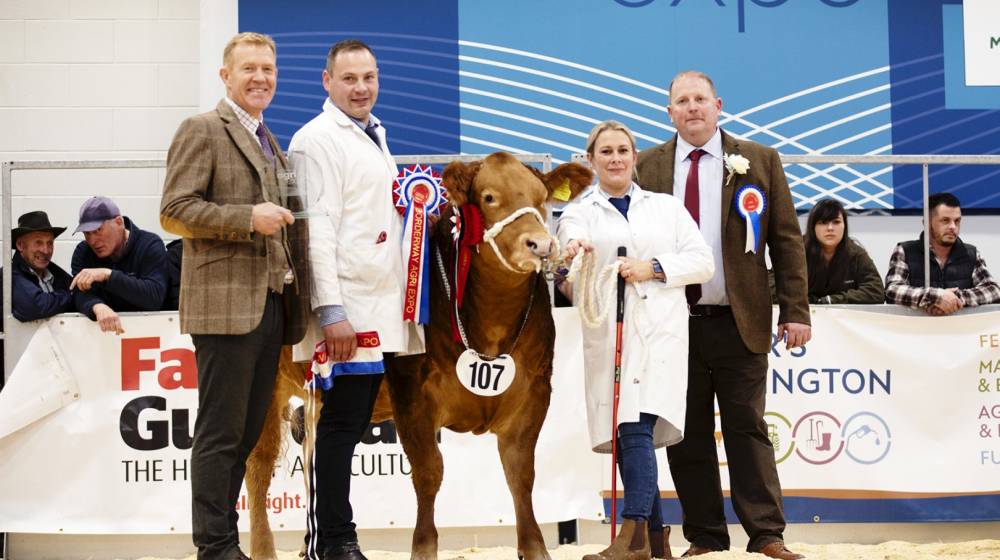 2021 Borderway Agri Expo Returned with a Bang in More Ways than One!

After a year away it was fantastic to see thousands of members of the farming community meeting and competing again at the 2021 Borderway Agri Expo, the UK’s largest autumn livestock showcase.  Hosted by Harrison & Hetherington at Borderway Mart, Carlisle, there was lots to celebrate throughout the day, but nothing more so than for the overall champions.

Harryman & Warriner’s Limousin x heifer ‘Miss Dynamite’ scooping the Supreme Championship in the Cattle section with  Reserve going to D. Small’s and B. Wilkinson’s ‘Atomic Blonde’, a Limousin x heifer. In the sheep section it was a double accolade with R Hall & Son scooping overall winner for a pair of Beltex lambs and reserve for a pair of Texel lambs.

The damp weather certainly did not dampen the spirit and, after the uncertain times we have recently been faced with throughout the COVID-19 pandemic, it was a joy to see in the region of 11,000 members of the livestock industry coming out in force to celebrate all, at the event held on Friday 29 October.

Speaking afterwards, Richard Rankin, Chief Executive of the H&H Group said: “Our aim has always been to put on an event that represents the livestock industry as a whole and following last year’s disappointing cancellation, this year has proved that Borderway Agri Expo does just that. Bringing together all sectors of the industry, it has been a spectacular showcase celebrating everything that the agricultural sector is good at”.

The new addition of a series of seminars hosted by H&H Land & Estates this year proved very popular, with key industry figures speaking to a packed audience on subjects of current note in Agriculture.

First of all, Neil Shand and Phil Stocker, Chief Executives of the National Beef Association and National Sheep Association, gave insight into UK consumption trends, challenges and opportunities facing the industry and what they see for the future of livestock trading. This thought-provoking seminar was chaired by Chris Dodds, Executive Secretary of the Livestock Auctioneers Association and the take-home message was that it is the responsibility of everyone in the livestock industry to find solutions to environmental challenges and encouraging British consumers to reconnect with British agriculture.

Next up, Lloyds Bank Farming Ambassador, Adam Henson, chaired a Young Farmer’s Special seminar, all about maximising opportunities for new entrants and young farmers. Speakers included Shepherdess, Emma Gray and husband Ewan Irvine, Tom Vickers of Northern Native Produce and Jonathan Hird, Chartered Surveyor for H&H Land & Estates. All explained the opportunities they had grasped and challenges they had faced in establishing their agricultural careers, whilst giving advice to aspiring young entrants on getting a foothold in the industry.

The third and final seminar of the day was a discussion on The Future of Rural Support Schemes chaired by H&H Land & Estates Associate Director, Tim Sedgewick. Speakers John Hustler, DEFRA Policy Advisor, Adam Henson, Farmer & TV Presenter and Emma Smith, Chartered Surveyor for H&H Land & Estates explained the vast changes currently underway as to how farm income support is delivered. It also highlighted specific changes and opportunities that lie ahead for farmers from a schemes and grants point of view.

Another new addition to this year’s programme was The David Allen Stockperson of the Year Award which saw 25 pairs of young farmers challenged across four areas of livestock farming: stock-judging, EBVs, carbon and stock value. The aim of this competition was to test the skills, knowledge and capabilities of the progressive young farmer and it did not fail to highlight the strength of the future driving force behind the industry. First prize went to Chris and Sophie Mitchell from Walton YFC; second went to Jack Robb and Josh Geary from Woburn YFC; and third went to Taylor Charlton and Henry Crocker from Skelton YFC.

A brand-new presentation was made this year to commemorate the life and achievements of one industry stalwart whose untimely death in 2019 shocked the livestock community. The David  Thomlinson Lifetime Achievement Award was  presented to Newark Farmer, John Gent. This award has been established with the aim of recognising commitment, success and accomplishment within the livestock farming industry, something which David showed in abundance. Commenting on receiving his award, John simply said: “I am totally overwhelmed. This means everything to me. David Thomlinson was an absolute legend.”

The livestock show, as expected, showcased the exceptional quality of cattle and sheep from some of the UK’s most notable breeders and producers. Once again, this year was a year for the ladies, with August 2020 born Limousin X heifer, Miss Dynamite, owned by Harryman & Warriner of Pickering, scooping Continental Heifer Champion and Overall Champion. Reserve Overall Champion went to the Reserve Champion Heifer, Atomic Blonde, a Limousin X heifer presented by D Small & B Wilkinson of Co. Down.

On awarding the Champion title, Judge James Crichton, said: “Miss Dynamite was the perfect weight and the perfect butcher’s animal. Totally in proportion, level right through to the top and with well balanced legs

“Today the cattle have been outstanding, in recent times there have not been many shows and such a huge effort has been put in by every exhibitor, and all the animals have handled very well.”

Michael Scott who stepped in to judge the Baby beef said, “I was judging for a quality and correctness. There was a great show of calves throughout and the final eight all had plenty of spark, however the champion was the most correct.”

With almost 300 entries across the five breed society shows there was exceptional representation emphasising the qualities of each individual breed. Results of the Breed Society Shows are as follows:

Across all the sheep classes there was a large number of high-quality entries. Supreme Championship went to R Hall & Son’s pair of Beltex lambs and reserve supreme championship to a pair of Texel lambs. Speaking of their win they said, “It is so nice to be back at Borderway Agri Expo, and we are delighted to win the top two spots. Winning is not just about today, it is down to everyone’s hard work throughout the year”.

Champion Pair of Hill Bred lambs went to DF Crew with a pair of Cheviot lambs and the reserve ticket was presented to JJ Frame & Co for their pair or Cheviot Hill lambs.

Champion Bred lambs from a Hill Ewe went to Messrs Fawcett and the reserve place went to Ioan Jones.

The new Butcher’s Lamb class for a single lamb over 50kg was won by R Hall & Son, with Sam Booth following in second place.

With a class of 24 entries, the NEMSA Best Pair of Mule Gimmer Lambs, judged by Val Brown, was  won by J Robinson & Z Ward.

Val said “The Champions were a proper pair both equally good as each other with tremendous loins and gigots. The overall show was fantastic and the top three pairs in all classes were worthy winners.”

Commenting on the return of Borderway Agri Expo this year, Harrison & Hetherington’s Managing Director, Scott Donaldson said: “Each year Borderway Agri Expo grows in size, scope and reputation. This year was no exception which was even more prominent following last year’s cancellation due to the pandemic.

“Yet again, the quality of livestock shown has been second to none and it is a huge credit to our breeders, producers and the UK livestock industry as a whole. I know I speak on behalf of the judges when I say congratulations to all prize winners today. Once again, judging was extremely challenging as entries really were outstanding.”

Agri Expo is a true celebration of British livestock and with this year’s emphasis on the future of the industry, the next generation were a firm focus.

The young handler classes through the commercial cattle and sheep classes again attracted strong interest. Successful winners included, Grace Elliot in the sheep classes and in the cattle classes it was Michael Brannen lifting the junior handler and Hetty Hutchinson taking the senior title.

Borderway Agri Expo has become an all-round showcase, not just for livestock, but for all elements of the agricultural sector where farmers can learn all about the latest industry developments and technology from trade stands who are experts in their field. It is also a fantastic networking event for specialist business and professionals. The award for the best outdoor trade stand was awarded to Johnston Tractors Ltd, with the best indoor trade stand award going to A W Jenkinson. The best breed society stand was presented to the Aberdeen Angus Cattle Society.

Summing up the return of this spectacular showcase, Scott Donaldson continued: “We couldn’t have asked for a better return of Agri Expo. It has been incredible. On behalf of us all here at Harrison & Hetherington I would like to say a huge thank you to everyone for their continued support and helping to make this a day to remember – the sponsors, the judges, the livestock and trade exhibitors and the general public.

“This was our 14th Agri Expo and since we first launched, our aim has always been to not only provide an event where British livestock farmers could show stock, but one that would support our livestock farmers in terms of business, education and socially.

“Agri Expo has yet again brought together people from across the UK and the feedback received is that the future of the industry is exciting for those prepared to embrace change. We must pull together now more than ever to take on the industry challenges as we head into uncertain times, but farmers are resilient, and we will prove that once again.”