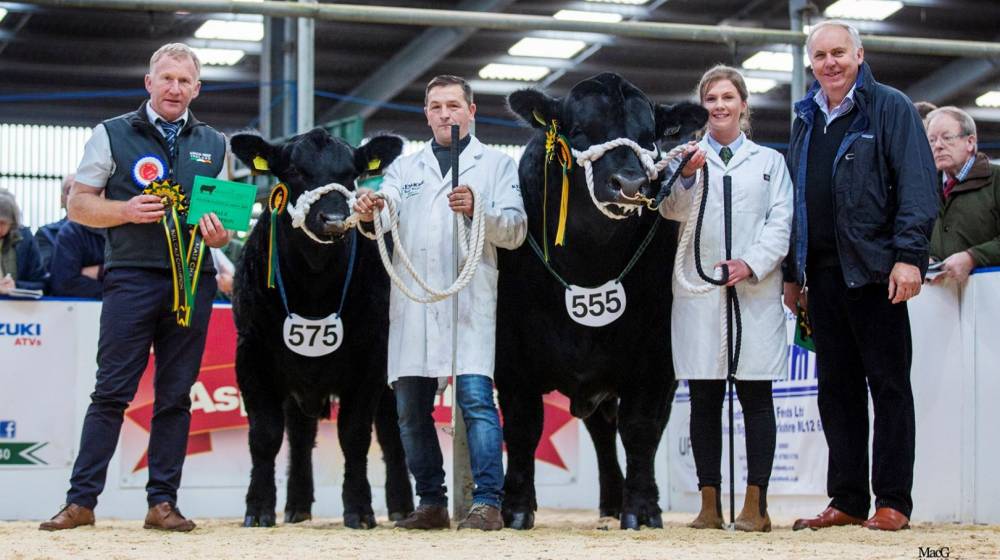 Organisers of Borderway Agri Expo, Harrison and Hetherington, today announce the much-awaited details of the 2021 pedigree judges. The five pedigree calf show sections, Aberdeen Angus, Beef Shorthorn, Simmental, British Blue, and Hereford are held alongside the main cattle and sheep classes. This year, the Aberdeen Angus will be judged by Mathew Stoker, of the Easton Greys Herd, Beef Shorthorn will be judged by The Greenley Herd’s Graham Towers and Cameron Jackson who runs the Future Herd will judge the Simmentals. British Blue judge will be Andrew Kay of the Gass herd in Ayrshire and last, but by no means least, the Hereford judge will be Aberdeenshire’s Abbie Anderson, whose family run the Panmure Hereford Herd.

Borderway Agri Expo is being held on 29th October at Borderway Auction Mart in Carlisle and is renowned as being the UK’s premier autumn livestock show. Historically, the pedigree calf shows each attract the highest calibre of stock and together attract numbers of around 350 head of cattle.

The judges have all been selected for their expertise in their own specialist breed, and their critical eye for detail. On announcing the line-up, Scott Donaldson, Managing Director of Harrison & Hetherington said: “The Pedigree Calf shows are a very important part of Agri Expo as they give us a glimpse into the future of the respective breeds. There is always a tremendous showcase of young stock across these shows, and it is certainly no easy feat having to make the judging call. We are honoured to have so much experience and knowledge within this year’s team and I would like to thank them all for their support.”

Aberdeen Angus judge, 41-year-old Mathew Stoker, has worked with pedigree cattle for most of his life and for the last ten years has managed the Easton Grey’s Pedigrees, near Malmesbury in Wiltshire, which includes a herd of 60 Aberdeen Angus cows.

He says: “This show is notorious for being the premiere Aberdeen Angus Calf Show in the country and this year, as there really have not been many competitive platforms available, I think there will be a tremendous turn out in terms of numbers and quality. I will be looking for breed character, style, and an easy fleshing type of animal. Something with a good stance and structural correctness, just what the modern Angus needs to be.”

Shorthorns judge, Graham Towers from Hill House Farm near Welford, judged at the Beef Shorthorns Spring Show in 2018 and has been a regular visitor to the Agri Expo. In looking forward to the event Graham said: “After two years in lockdown, I was delighted to be asked and I am looking forward to returning to judge the Shorthorn section. Judging is a great challenge; it is always nice to see the young stock as they are the future of the breed. Agri Expo is an important livestock event, and it provides the opportunity to compare the other breeds like for like. In terms of what I will be looking for in choosing the winners, it will be femininity in the females and power in the bull calves.”

Simmental judge, 29-year-old Cameron Jackson, has been involved with the Simmental breed for most of his life and currently runs The Future Herd at Woodyett Farm, Kirkfieldbank, Lanark. Cameron is no stranger to the judging ring, having judged the National Stars show at the Three Counties Showground, and many young farmers competitions. “Agri Expo is an important platform for both pedigree breeders and those in the commercial sector to get out and meet potential customers. It also provides breeders with the opportunity to practice their handling skills and to get their stock ready for the following year’s summer season.”

British Blue judge Andrew Kay, of Gass Farm, near Maybole, has been breeding British Blues for twelve years. This Scottish breeder set a new British Blue breed record for a bull earlier this year, when his home bred entry, Gass Okay, sold for 30,000gn at the Border British Blue Club’s annual spring show and sale at Borderway. Andrew has judged several regional and local shows, but this will be the largest and most prestigious so far. Andrew says: “It is such an honour to be asked to be a part of such a great show and to judge the British Blue Calf Show. I have been to Agri Expo a couple of times before and think it’s a wonderful day out. This time will be quite a different experience and one which I’m really looking forward to. When judging I will be looking for a good, strong, correct calf with plenty of character about it. I know that I am guaranteed to see a particularly good show of cattle, and the standards will be exceptional. Picking up a rosette at Agri Expo is a huge accolade particularly with such fierce competition.”

Abbie Anderson, whose family has the established Panmure Hereford herd, has been invited to judge this year’s Herefords classes. Aged just 26, Abbie, a vet, will be one of the youngest judges taking to the ring, and she tells us of her excitement at the opportunity: “I must admit I was quite surprised and very honoured to be asked to judge at this year’s Agri Expo. I have had experience of judging the breed as I judged The Royal Highland Showcase earlier this year and have judged the breed at local shows with my mother. We have shown at Agri Expo in the past and when judging the Hereford section, I will be looking for something with a good head and good ears and of course, size and power are also important.”

In addition to the main commercial cattle and sheep shows, and the pedigree shows, each year in the region of 140 trade stands exhibit at Borderway Agri Expo. These businesses who attend provide a showcase for visitors to learn more about the latest advancements across the livestock sector, genetics, machinery, and equipment along with supporting management systems.

Entries are now being taken for all classes at the 2021 Borderway Agri Expo via this website or call 01228 406230 for further information.